Red carpet glamour gave way to gospel-style fervor Thursday night at the 26th annual Freedom Awards ceremony at the Orpheum, as participants celebrated triumphs of the past while issuing calls to action for the present and warnings for the future.

Although President Trump rarely was mentioned, National Civil Rights Museum officials and Freedom Award winners frequently pointed out that this year’s event was taking place in a post-Obama America in which dark forces that once seemed all but vanquished — including white supremacists, neo-Nazis and politicians eager to disenfranchise minority voters — have become emboldened.

After Barack Obama was twice elected president, “We got complacent in some respects and we got overjoyed in some respects,” said Freedom Award-winner Bernice A. King, 54, the daughter of Coretta Scott King and Dr. Martin Luther King Jr.

Unfortunately, “struggle is a never-ending process,” King — a “Rev. Dr.” like her father — told the enthusiastic, often cheering audience of about 1,400 at the Orpheum. “Freedom is never really won. Every generation in the world is born into the freedom struggle.”

Museum president Terri Lee Freeman echoed that sentiment when she spoke at the start of the evening, against a video backdrop that presented images from 50 years ago (“I Am a Man,” LBJ) with images from today (“Black Lives Matter,” Colin Kaepernick) to make a point about the continuing need to fight for social justice. “We learned that the election of the first African-American president did not mean we are living in a post-racial society,” Freeman said.

“I think America is facing a real crisis, and we’re going to have three more years of it,” said Morris Dees, 80, in a press conference before the awards ceremony at the Halloran Centre, adjacent to the Orpheum on Main Street.

For Dees, another of this year’s three winners of the National Civil Rights Museum’s  signature Freedom Award, the public return of marching Klan members and other public racists is especially riling: As co-founder and chief trial counsel for the Southern Poverty Law Center, based in Dees’ home state of Alabama, Dees used a strategy of “education and litigation” to battle discrimination, suing racists groups in civil court and winning numerous victories, including a $7 million judgment in 1987 that bankrupted the United Klans of America.

A link has been posted to your Facebook feed.

Dees also touched on politics during the afternoon press conference with comments about the Alabama Senate race, which pits Republican nominee Roy Moore, twice removed from his judicial bench for defying federal court orders, against Democratic candidate Doug Jones, who successfully prosecuted two Klan members for their roles in the 1963 Birmingham church bombing that killed four little girls. “He is not qualified to be a United States Senator by any means,” Dees said of Moore. “If the African-American community would really unify together and vote like it did when they elected Obama the first time,” Alabama could have a Democratic senator, he said.

Joining King (head of the King Center for Nonviolent Social Change in Atlanta) and Dees as a Freedom Award winner this year was South African musician and anti-apartheid crusader Hugh Masekela, 78. However, the jazz trumpeter — who scored a No. 1 pop hit in 1968 with the instrumental “Grazing in the Grass” — could not attend the ceremony because he is undergoing treatment for prostate cancer, according to his son, TV personality Selema “Sal” Masekela, 46, who accepted the award in his father’s place.

“This is the first date my father has missed in his 60 years” of performing, said the younger Masekela. “He was angry.” Nevertheless, a happy-looking Hugh Masekela, wearing a dapper gray scarf and dark glasses (necessitated by recent eye surgery), did appear in a video made for the ceremony, raising a “power fist” into the air when he said: “Thank you, ladies and gentlemen.”

The absence of Masekela meant that none of the winners at this year’s ceremony was a “popular” celebrity. In comparison, some past recipients of the Freedom Award include Nelson Mandela, Bill Clinton, Sidney Poitier, Stevie Wonder, the Dalai Lama, and at least three people so famous — Bono, Oprah and Usher — they don’t even need last names. 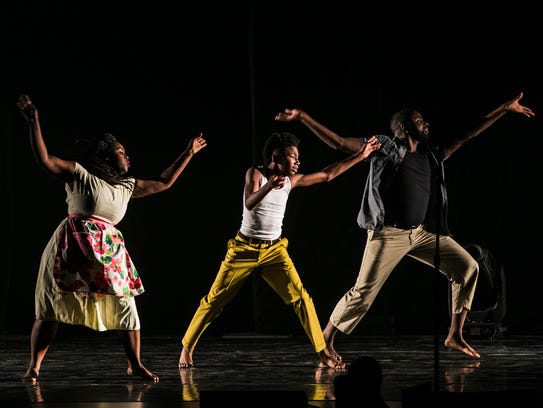 But who needs stars when you have hometown heroes? Also recognized at the ceremony were the 1968 Memphis sanitation workers whose strike for better wages and working conditions brought Dr. King to the city, where he was assassinated on April 4. Five surviving workers took the stage, while a multitude of family members representing even more of what Dr. King called “1,300 of God’s children” — the striking workers — took to their feet at their seats to the cheers of the audience.

Rose Phillips Bingham, 68, one of 12 children of the late Jake Phillips, a longtime sanitation worker who died in 1986, said her father was more concerned with making a living than making history when he went on strike in 1968. “It was not about the significance of Dr. King, we weren’t really talking about that,” she said, in an interview before the ceremony. “It was about bread and butter. How to make that food stretch.”

With a format different from years past, the Freedom Awards ceremony — hosted by journalist and “image activist” Michaela Angela Davis — was preceded by a 5 p.m. reception at the Halloran Centre. A “red carpet” photo area was erected in Main Street, which was blocked to traffic from Beale to Linden, creating a street party effect, even though most of the attendees were in formal attire. 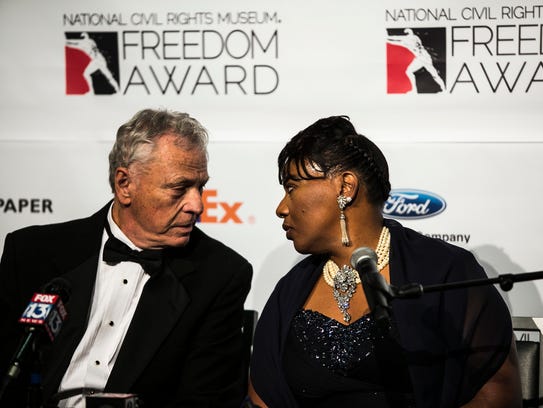 Bernice King was the evening’s most rousing orator. She said the Freedom Award was especially meaningful to her because “this is the city that 49 years ago took something from me and my siblings and my mother. And so tonight I am overwhelmed that the National Civil Rights Museum, located were my father was taken from us, is giving something back to me.”

Despite the black tie and evening gowns, the crowd was loose, reacting with multiple standing ovations to such performances as a narrative dance piece by New Ballet Ensemble (inspired by Stevie Wonder’s “Living for the City”), French-born harmonica player Frédéric Yonnet (a medley of Sam Cooke’s “A Change Is Gonna Come” and Marvin Gaye’s “What’s Going On”), opera tenor Rodrick Dixon and poetry slam champion Ed Mabrey, whose rapid-fire freestyling had the audience on its feet by the time he reached his defiant yet hopeful final line.

“So where do we go from here?” Mabrey asked. “Where ever in the hell we choose.”

This Day in Black History